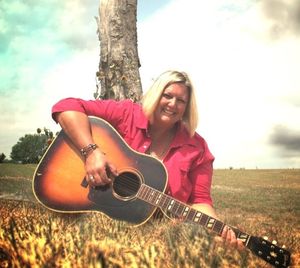 Patti Dixon is an award winning, published songwriter.  She's been awarded as the current Songwriter Of The Year by the Austin Songwriters Group having won 12 awards  overall, 8 first place finishes in multiple categories in their international songwriting competition.  She brings many songwriting flavors to the table blending genres with ease.  She has seen her material recorded and performed on national radio and television over the years including the Dixie Chicks.  Best pegged as Americana, she combines all the right elements for songs dripping with emotion.  Known for tugging at your heartstrings with memorable lyrics and melodies, she can also kick it up a notch, lending powerful vocals as well.  She enjoys performing not only solo but as a duo, trio or full band.  This versatile performer has played many a Texas festival, SXSW, as well as festivals in surrounding southern states.  She also loves performing at small town venues, house concerts, large or small for that intimate feel and the best fans in the world.  Coming soon will be a new six song EP, "Up Close" of Patti's orginals, produced by Austin's Gabriel Rhodes.  You'll hear Gabe's amazing guitar work and agree he is one of Austin's best and brightest musicans along with John Chipman (The Resentments) on drums and Scott Graber on Bass. Several of the winning songs will be featured as well as two written during the recording period.

Additionally, Patti will release an all original 12 song Cd, "Big, Big Love" this year that was already in the works. This was produced by Tommy Byrd  (Byrd & Street) and she at Byrd House Studio in Austin, Tx.  Dave Scher, an illustriously talented touring musician (Austin Based) was foremost on the guitar work and other instruments.  Patti's previous CD, One Life, has 13 original cuts featuring some of Austin's best musicians as well and additional award winning songs.  Her live studio performance on 94.3 KWVH Wimberley Valley Radio on Coach's OVER  EASY SHOW featured her as their LONE STAR ARTIST on 3/16/22.  She can be heard frequently on the their daily play list.  During the last Texas Songwriter's Symposium held in Austin,Tx. she won FIRST PLACE POP for the song 'EVERYBODY".  Additionally, the song. THERE'S A GIRL took FIRST PLACE COUNTRY, as well as the spiritual song  LOVE IS PATIENT taking SECOND PLACE in LOVE SONGS. She also received SECOND PLACE in SINGER SONGWRITER CATEGORY.   These songs were featured in a compilation CD from Austin Songwriters Group . "HOW OUR STORY GOES, RAINING SUNSHINE, respectively, were  awarded FIRST PLACE FOLK and THIRD PLACE COUNTRY at the Texas Songwriter's Symposium.  These songs were submitted to ASG's U.S. & International Song Competition and announced there.  Additionally, Patti has had multiple songs featured by industry publishers in conference stage appearances during the Texas Songwriter's Symposium in Austin, Texas.  She has now been named a "Publisher's Pick'' for 5 years consecutively and performed showcases of her work.  She also enjoys writing poetry, short stories and commercial jingles.

Patti was born deep in the Texas hill country in Rocksprings, Texas.  Generations of her family grew up there in this ranching community.  When she was ten, her grandfather, the singing cowboy, Nolan T. Guthrie, bought her first guitar.  He pulled it right off the shelf and put it in her hands, a child's life forever changed.  She and her immediate family soon moved to the Texas Coast.  Patti loves traveling to all ends of Texas and beyond, seeing old friends and making new ones as she spreads her message of ONE LIFE to live and love.

April 2018: PATTI WAS NAMED  KWVH 94.1's LONESTAR FEATURED ARTIST ON WIMBERLEY. This followed a live studio performance on Coach's "OVER EASY" Show and continued airplay on the top 10 playlist to date.